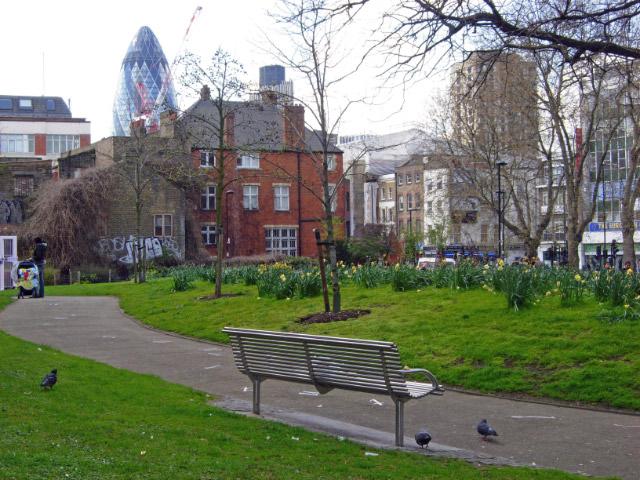 Altab Ali Park, Whitechapel, the site of the original Church of St.Mary Matfelon, usually known as St.Mary's Whitechapel. A picture of the original church can be seen here. A new church was opened in 1877, which was ravaged by fire in 1880, and after further damage during WW2 the church was demolished in 1952. Joseph DALE and Caroline PAWLE (parents of the settler Christopher DALE) were married in St.Mary's, as were John Henry HEATH and Maria Iveson SKARRATT, Robert HENMAN and Mary Ann LIVING, James LEPPAN and Ann WHITE (parents of the settler James LEPPAN), Archibald McKENZIE and Amelia CHAPMAN and John PULLEN and Ann TINDALL (parents of the settler Thomas PULLEN). The children of Matthew DOLD were baptised in St.Mary's, as were the children of Thomas and Sarah GRIFFIN, Charles HAW (son of Simon HAW and Alice Margaret PENN) and two children of Richard and Elizabeth WEBB.
Photo by Stephen McKay. (CC BY-SA 2.0)