by Richard Ball, This email address is being protected from spambots. You need JavaScript enabled to view it.

When I first became interested in my Cape ancestors, around the year 2000, I was thrilled to find various family trees already on the internet as well as email groups concerned with genealogy, such as the Rootsweb South Africa list and, at that time, the Genforum group, run by Johann Erasmus, concerned mostly with Afrikaans genealogy. At first I was happy to be given dollops of ancestry by the members of this list.

During this time I often received or saw posted the advice: 'Don’t re-invent the wheel' - that is, one should simply build on what was already available, in the printed genealogies.

In an ideal world, of course, this would be good advice but after a while I learned about the documentary sources of such information and how to access them. I then began to find differences between what I was discovering in the documents and the printed genealogies. After I investigated families such as the Smits, Louws, Van Stadens and Van Wyks where all the printed genealogies contained serious mistakes, I learned to ignore this advice and now always check up on any genealogical information myself - what, after all, is the use of a defective family tree? With each new family I investigate, therefore, I now re-invent the wheel by obtaining my data from the original contemporary records wherever possible.

I present my investigation into one branch of the Koekemoer family as an example that adopting a published genealogy is not always wise.

The original wheel I would assume is the Koekemoer family tree printed in the Geslacht-register der oude Kaapsche familien (Genealogies of old Cape families) part 2, edited by G.M.Theal from the research of C.C.de Villiers, published 1894, and reproduced on the following page.

This layout was copied, with additional generations, into Genealogies of Old South African Families (DeV/P), the revised and augmented edition of the earlier work, edited by C. Pama, 1966 and copied again, with yet more generations added, into the South African Genealogies (SAG), part 4, compiled by J.A.Heese, edited by R.T.J Lombard and published by The Human Sciences Research Council in 1992.

Here, then, is a good example of 'not re-inventing the wheel'.

According to the genealogy of the Koekemoer family as there presented (please see the following page), all present day South African members of that surname are descended from the five youngest sons of Diederik Koekemoer (1716-1790). Judging from the extended genealogy given in SAG 4, it appears that by far the largest number of modern day Koekemoers descend from Diederik Johannes Koekemoer (born 1765), son of the above Diederik and his second wife, Jacomina van Wijk. In SAG and DeV/P his De Villiers code is: b1c4.

There was also, however, as you can see from the tree, a second member of the Koekemoer family named Diederik Johannes Koekemoer (born 1771), the grandson of Diederik Koekemoer (1716-1793) and his first wife, Catharina van Wijk. His De Villiers number, in both SAG 4 and DeV/P is b1c1d1 and he was a contemporary of b1c4.

Neither of these two men is provided, in the printed genealogies, with a date of death or any other information, and, having found from previous research how difficult it can be to identify which John Jones it was who married Mary Brown when you have several John Jones baptisms to choose from, I wondered what evidence the original compiler had used to decide which of the two men had married Hilletje Pretorius and produced offspring. 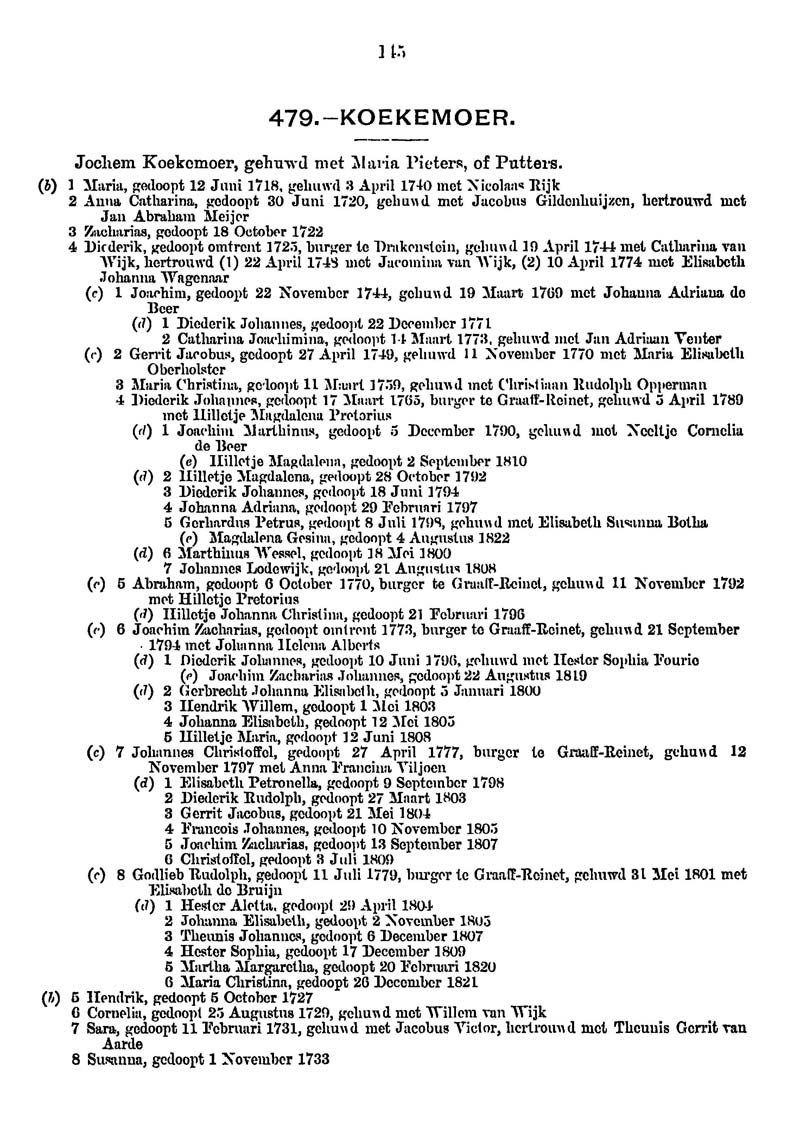 Above is the Koekemoer family as it appears in the Geslacht-Register der Oude Kaapsche Familien (Genealogies of old Cape families) part 2, edited by G.M.Theal from the research of C.C.de Villiers, published 1894.

This article, therefore, concerns just two of the descendants of Jochem Koekemoer and Maria Putters, their grandson,

and their great grandson,

One of these men named Diederik Johannes Koekemoer married Hilletje Magdalena PRETORIUS at Cape Town on the 5 April 1789:

As you can see from the marriage inscription above, there is nothing to identify which of the two men named Diederik Johannes the bridegroom was.

There are various ways one can attempt positively to identify such an individual, and some of these will be presented later in this article, but the most obvious first step, it seemed to me, was to try to establish dates of death for both of these gentlemen if possible. This proved to be fairly easy for one of them.

The South African Archives online index NAAIRS listed a liquidation and distribution account (boedelerekening) for one of them:

Since Diederik J Koekemoer and his wife were bearing children until at least 1808, according to the printed genealogies, this Liquidation and Distribution Account would presumably prove to be that of the Diederik Johannes K who did not leave offspring, and so it proved to be.

In the good old days when I was doing this research it was relatively easy to obtain a copy of a document in the Cape Archives and I commissioned photographs to be taken of this document.

A liquidation and distribution account (in the original Dutch a 'boedelrekening') consists of a set of accounts detailing the credit and debit sides of a deceased estate and the distribution of the ensuing balance, if positive.

The final accounts in this particular document are dated 31st May 1794. The earliest date in the accounts is 12 April 1793. It states that this Diederik Johannes Koekemoer was unmarried and had died without making a will. His estate was therefore being distributed (as laid down in the Roman Dutch Law under which it was administered) amongst his brothers and sisters who are named as follows:

This, of course, proved the printed genealogy to be incorrect, and suggested strongly that it was in fact Diederik Johannes Koekemoer (bapt.1771), b1.c1.d1, who had married and left offspring,

More recently, corroborative evidence has come to hand in one of the Bibles from the National Cultural History Museum Pretoria which have been photographed on the initiative of eGGSA and are now available to all in the eGGSA download library

This extremely interesting document starts with the marriage of Jochem Koekemoer and Johanna Adriana de Beer, married 18 March 1769. This is followed by the birth on the 21st April 1771 of their son Diederik Johannis, then follows the death of Jochem Koekemoer 27 May 1772, and then the birth of their daughter Catharina Jochemina on the 25 October 1772.

The bible then records Johanna Adriana de Beer's re-marriage to Marthinus Wessel Pretorius on 11 April 1773, followed by the successive births of eight children to the couple

followed by the record of the death of Johanna Adriana de Beer on the 28th March 1797.

We now skip on to the baptisms of the children of Diederik Johannes Koekemoer and Hilletje Magdalena PRETORIUS. It was the practice then, and often still today, for the baptismal witnesses to be chosen from close family members, the grandparents and uncles and aunts of the child being baptised. Baptismal witnesses can, therefore, be important clues when doubt exists as to where the parents belong in the family tree.

Here are the baptismal inscriptions of the first four children of Diederik Johannes Koekemoer and Hilletje Magdalena PRETORIUS:

The baptismal witnesses above can probably be identified as half brothers and sisters of Diederik Johannes and the wife of the first of these.

Here the witnesses are Diederik's whole sister and her husband, with two half brothers and sisters.

Witnesses: DJK's mother and step fatter, uncle and half sister

All the above seems to indicate, without much doubt, that the traditional view of the Koekemoer family tree, as copied from one publication to another, is incorrect. Re-inventing the wheel has meant that this family tree should now look like this:

b1 Diederik Koekemoer 1716 - 1790 Residence: De Twee Fonteijnen, on the Sondags Rivier, below the Camdeboo Mountain